A Motoring Lawyer who covers Yorkshire and beyond 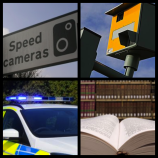 Ministry of Justices figures  have consistently revealed over 50,000 convictions in Yorkshire for Road Traffic Offences. In North Yorkshire in particular, the number of offences rose, for example, from 5,500  in 2013 to 8,000 in 2015 with the biggest leap in offences of speeding, from 1780 to 4144 - largely as a result of the introduction of the mobile speed camera vans that are now a feature of North Yorkshire driving.

Around the country drivers prosecuted for motoring offences (2017 figures) increased by 3% with over 168,000 people convicted of speeding - that's equivalent to the population of a town like Harrogate all with penalty points on their licence, and the increased risk of disqualification.

There are many different motoring offences , the majority of which result in licence endorsement. In today's busy world many people are heavily dependent on their driving licence not least to perform their job such that a driving diqualification could result in catastrophic personal financial consequences.

It is important that when facing a driving offence you receive support and advice and where necessary effective representation. Motoring Lawyer Philip Morris appears in many courts and all of Yorkshire in particular. With over 20 years giving advice in connection with Driving Offences you can rely on his straightforward manner, knowledge and advocacy skills in ensuring that your driving offence is dealt with properly. Why not take a look at some of the comments Phil receives.

The most common driving offences are listed here. If you face a motoring offence that is not listed you should still get in touch.

As a leading Motoring Lawyer for Yorkshire and beyond Phil can be contacted on 07703 356375.