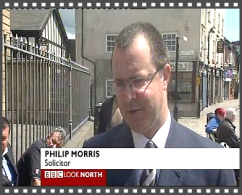 You should feel confident in your legal representative. It can be awkward to ask whether they actually have the expertise they say they have. And so here is a brief precis of Phil's Motoring Legal career:

- Initially Qualified as a Solicitor 1992. His first Magistrates Court trial as a new Solicitor involved motoring !

- Set up his own Solicitor practice in January 2000, called Philip Morris Solicitors.

- Became a Solicitor Advocate in 2001, enabling him to appear as a Solicitor in the Crown Court since when he has been involved in many jury trials;

- Merged his practice in 2003 and became a partner in the firm of Smithson Hinds Morris.

- Phil's record for a jury returning a not guilty verdict is 14 minutes.

- Phil's base is in Leeds but regularly travels to other court areas.

- Phil is permitted by the Bar Standards Board ( the regulatory body for Barristers) to accept instructions directly from the public under the Public Access Rules without the need to incure the additional expense of a Solicitor.

Throughout more than 20 years of practice either as a Solicitor or Barrister Phil has had personal experience of conducting all types of cases mentioned on the site. Phil believes that experience in this often complicated area of law, both as an advisor outside court but also as an advocate offers the best opportunity of ensuring that the needs of the client are properly satisfied.

Phil Says: " I cannot begin to imagine the difficulty I would experience if I had the misfortune of losing my driving licence. I know just how important it is for those who have a similar need to ensure that, if they are accused of a driving offence, they receive accurate advice and effective representation.

It is important also for the motorist to feel that they receive value for money in their representation, especially now that the rules relating to the recovery of costs have been cut. Clients are often pleasantly surprised that the instruction of a Barrister direct represents a cost effective way of receiving specialist court representation "